2 Tips to See the Northern Lights

The Northern Lights, who never dreamed of seeing one?

The Northern Lights of Iceland 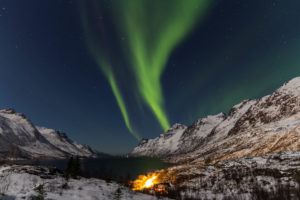 It was during our trip to Iceland that we had the chance to see the Northern Lights for the first time.

Over ten days of travel, we were even able to attend this show four evenings.
We had put all the chances on our side and for that we realized that we should not listen to what most people say, sites, blog…

If we had followed their reasoning we would not have seen any Aurora Borealis.

You know this reasoning where you are told that it takes a totally clear sky with no clouds, far away from the cities because you have to be in complete darkness or very (too) late in the night. Yes, these conditions are PERFECT but they are NOT MANDATORY.

We were even told that there was no chance of seeing it because at the time we were there, there were no Aurora Borealis…

Then we made a choice, that of trying anyway, to believe in our luck and to believe that maybe, even if the conditions of which we have heard so much were not gathered we had a chance and well taken!

I told you right away, we saw the Northern Lights around 7:00 pm as after 00:00, near the cities not to say IN CITY and with clouds.
To tell the truth, it was snowing even when we decided to go and we saw them.

But to put all the luck on your side, there are two important points to know because we’re not go to the blind either. We met the one we missed, the one that changed our way of thinking, an Icelander, to whom we had taken a room for a few nights and seeing us looking for advice. 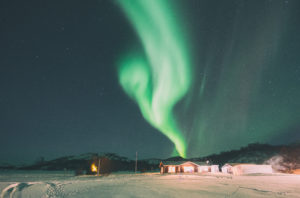 This first tip may seem obvious and yet the number of people we met in the youth hostels or even outside that didn’t think about doing it is consistent.

Iceland is a country where there is a lot of micro climate, it can snow above you and have a great sky clear up a few kilometers.

But positive, you will find on the site en.vedur.is very precise weather predictions. It was on this one that we watched the cloud cover around us and we knew well in which direction to go and especially when to venture out. 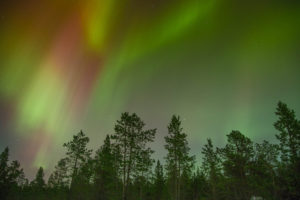 I hear you already say “Kp? But what is it?”. This is simply an indication to the intensity of solar storms. The larger number is, the more likely you are to see the Northern Lights. In fact the larger number is, more the aurora borealis is visible on low latitudes. The index varies between 0 and 9.

In Iceland, an index of 3 would give you a good chance of seeing a Aurora Borealis. But, we could see with clues slightly less than 2 (1.84 if my memories are good).

This index is noted on the site I mentioned above, but it’s to be taken with caution.

We have also advised us the softservenews site which will provide you with all the information you need to know the Kp index but also the real-time position of the Northern Lights. Be careful though, on the spot we noticed that there was a discrepancy between the moment noted and the actual moment of about 10/15 minutes.

To conclude, if you want to see Aurora Borealis don’t stay in your room, take the good weather information and Kp clues on the two sites I have given you.
And above all, go ahead and be patient.

And last word, a little precision, I only give you advice on something I have applied on the spot, and I want to tell you that I am only telling you to put all the chances of your side, this unfortunately doesn’t guarantee Northern Lights every time. We have come back empty-handed too.

Wishing you a good hunting for the Northern Lights.


This article was written by Herdroud and Laetitia. Visit their website here.